For those who haven’t snapped, nor chatted, Snapchat is a photo and video messaging application for iOS and Android, launched in September 2011. Pictures or video clips (known as ‘snaps’) are sent between users and displayed for a set amount of time before being deleted from the recipients device and Snapchat’s server.

A simple, but effective, premise that has seen rapid growth recently, with 350 million snaps being sent per day according to CEO Evan Spiegel; up dramatically from a reported 200 million in June 2013 and 60 million in February 2013.

But what are brands doing to take advantage of this emerging social channel? Here’s 8 examples of brands making good use of Snapchat as an online marketing channel; 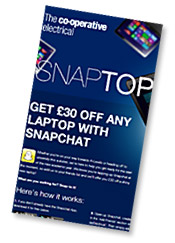 The first major UK retailer to use Snapchat for marketing, Co-operative Electrical pioneered with their ‘Snaptop’ campaign to offer discounts on laptops to students.

Given that the majority of Snapchat users are reported to be between 13 and 23 years of age, it represents an excellent opportunity for brands to reach a young demographic. Co-operative Electrical offered students £30 off any laptop when they added Co-operative Electrical as a friend on Snapchat. They’d then receive a promotional code via a ‘Snap’.

The campaign is still running so its successes remain to be seen, but it’s interesting to see Snapchat being used in this way.

MTV’s Geordie Shore promoted the launch of it’s 6th season by sending exclusive photographs and videos to fans via Snapchat in June 2013. Pitched as giving them a peek at the “cheekier side” of the show, it was arguably positioning itself well against Snapchat’s reputation for the distribution of racier material.

Directly addressing Snapchat’s reputation for ‘sexting’, TMW anticipated that some responses from fans could get a little risqué; “on those odd occasions where responses have been close to the line, we’ve been able to respond with an image of the new Deep Space shower gel, urging people to clean up and take a cold shower”.

Interestingly, TMW suggest that the time and costs associated with responding to unsolicited Snapchats on an ongoing basis could perhaps be detrimental to wider mainstream activity. Innovating before Snapchat has fully facilitated advertising and/or monetised it’s platform clearly comes at a cost.

Embracing the racier side of Snapchat, US clothing brand Karmaloop is sending fans risqué and provocative images of its models in (and out of) Karmaloop apparel.

This appears to have been successful, with the clothing brand attracting 2,000 fans in a matter of weeks. Their next step is to send Snapchat-exclusive coupons to fans.

It remains to be seen whether this is a responsible way of promoting a brand via Snapchat. 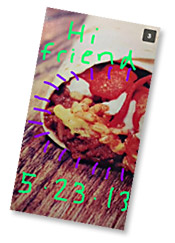 US fast food brand Taco Bell used Snapchat to send fans ‘snaps’ of their Beefy Crunch Burrito. It seemed to have a positive effect with users excited to receive Snapchats from a major US brand.

Tressie Lieberman, social media director at Taco Bell, told AdWeek “It feels extremely special to get a Snapchat … It’s almost like we pick up the phone and give them a call.”

This raises an interesting point of the early adoption of Snapchat as a emerging platform; offering exclusive information and offers to a select group could create a set of highly engaged brand advocates.

Widely regarded as the first company to utilise Snapchat for marketing, American brand 16 Handles used the platform for a ‘Snappy New Year’ campaign in January 2013. Promoting coupons for their frozen yoghurt products, they claimed that the campaign generated 1,400 interactions with friends.

Sports media company, Chat Sports used Snapchat to promote competitions to win MLB tickets. Interestingly they used Facebook and Twitter to give the campaigns momentum, asking users to add ChatSports as a connection and send a snap using the hashtag #gimmietickets.

Supercar manufacturer Acura used Snapchat to release a 6 second teaser video clip of a new prototype NSX supercar in July 2013. They only offered this to the first 100 users to add Acura_Insider as a friend, heightening the exclusivity and buzz surrounding the campaign.

The future of Snapchat marketing?

In June 2013, Snapchat raised US$60 million in a funding round led by venture-capital firm Institutional Venture Partners valuing the company at $800m. It’s clear that they have the financing required to evolve their platform to the next level.

However, in order to attract brands they’d be advisable to formalise their advertising offering and attempt to shift the negative perceptions of Snapchat being a risqué platform, repositioning it as a brand-safe environment. Or they could accept that Snapchat may only appeal to progressive brands that are willing to accept a degree of risk.

Certainly the rise of what is rapidly being termed ‘fast and furious marketing’ shows no signs of stopping and Snapchat is well placed to take advantage of the 18-25 demographic that’s abandoning Facebook in search of new and exciting platforms.

Do you know of any other Snapchat marketing campaigns? Post them in the comments below!

Tags from the story
snapchat